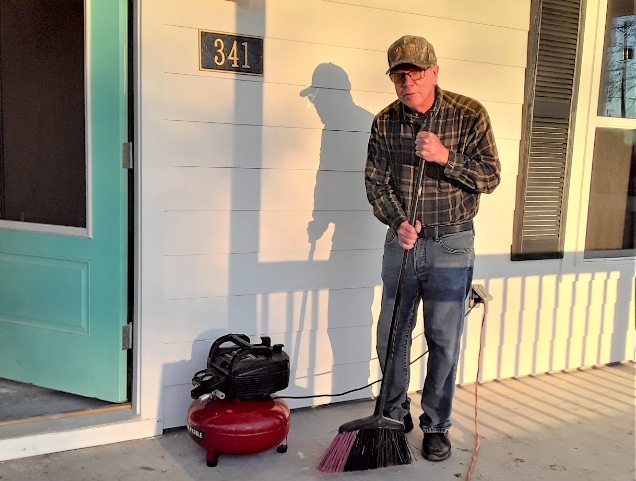 Craig Parrish enjoyed a long, successful career as a pipeline operations specialist for a multinational energy company in Houston. The husband and father of two juggled work, family time, and his love for golf and fishing just fine. That is, until something went seriously wrong.

“My wife and coworkers noticed the changes on my left side,” said Craig. “My left arm started to get stiffer, and I was beginning to drag my left foot.”

Craig experienced these changes two years before retirement. That meant that for the next two years, the simplest of tasks – like walking and moving – became very challenging to navigate.

“I was noticing it took me a longer time to finish tasks, and my coworkers and boss recognized that too,” said Craig. “I was getting slower on the keyboard, and traveling and meeting with the field team became more difficult.”

The 68-year-old was diagnosed with Parkinson’s disease in 2013 after tests and an MRI confirmed the diagnosis. Parkinson’s disease can’t be cured, but certain medications can help control the symptoms dramatically. Dr. Nicolas Nammour discussed various options with Craig, including medications to help manage problems with walking, movement, and tremors.

“At first, I did have improvements from the medications, but, over time, the drugs became less effective due to the progression of the disease,” said Craig.

After switching medications to counter the progression of the disease and side effects of certain drugs, Dr. Nammour encouraged Craig to consider deep brain stimulation (DBS) and referred him to Dr. Ashwin Viswanathan, a neurosurgeon at Baylor St. Luke’s Medical Center.

Dr. Viswanathan, who also is an associate professor of neurosurgery at Baylor College of Medicine, immediately identified Craig as a good candidate for DBS, a surgical option that consists of placing electrodes in the brain and connecting them to a battery-powered stimulator under the skin of the chest. The implanted device sends electrical signals to brain areas responsible for body movement.

Craig has responded well to the treatment and hasn’t needed additional medications since his surgery in June 2019. He considers himself a true success story. “Not having the tremors on my left side alone is a big improvement,” he said.

Craig, whose father also had Parkinson’s disease, is grateful for the outcomes of his treatment. “I was at least 10 years younger than my dad at the time of diagnosis, and I’m grateful that my DBS surgery is taking me down a very different life path than my father experienced with Parkinson's.”

Retirement hasn’t slowed Craig down. He’s keeping busy these days building a new home in the town of Matagorda while also making time for his wife, kids, and toddler grandkids.

Dr. Viswanathan was among the first group of doctors in Texas to use this advanced version of deep brain stimulation, which includes extremely precise robotic surgery and the latest generation of DBS devices. By adopting these advances, Dr. Viswanathan seeks to make the treatment of Parkinson’s more effective for more patients.