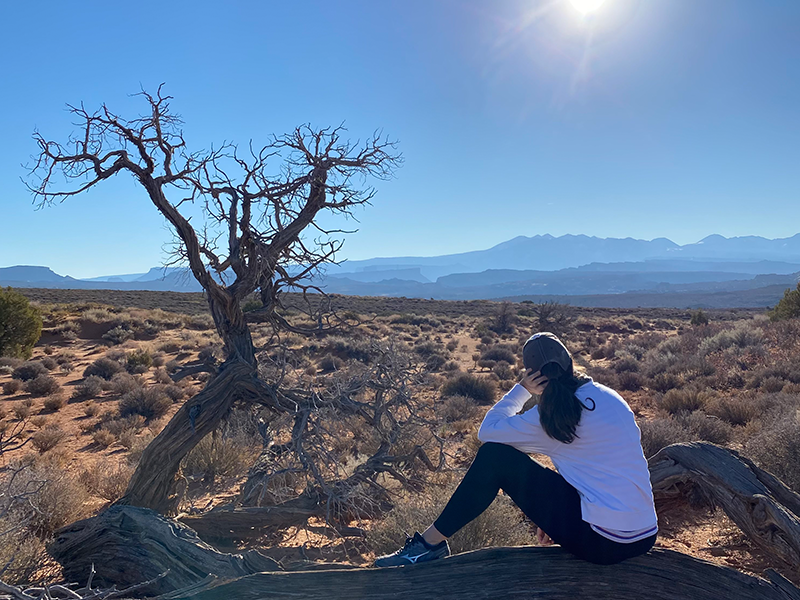 In 2017, Sarah was waiting for the results of a breast cancer diagnosis.

This came after a series of hard hits in her life. In July 2013, her dad passed away at 64 years old. In December 2015, Sarah decided to make a career change and went back to school at age 31. In June of 2017, she was in the best physical shape of her life and was on track to graduate in July. In August of 2017, she had to put her dog down while Houston was reeling in the aftermath of Hurricane Harvey. Then in September, the results were in. Sarah was diagnosed with stage 3, ER-positive breast cancer at just 33 years old.

She underwent 12 weeks of chemotherapy and three weeks of radiation, five days a week. After a mastectomy, Sarah’s doctors used tissue expanders, followed by implants, reconstruction, and follow-up surgery tweaks.

While on chemotherapy, Sarah used scalp cooling technology, an innovative practice that enables about 50% of patients to keep their hair while undergoing treatment. By wearing a cool cap before, during, and after chemo, the temperature of the patient’s scalp is lowered by a few degrees. This, in turn, reduces the amount of blood flow to the area, limiting the amount of chemo drugs absorbed by the hair follicles.

Because she kept most of her hair, very few people knew Sarah was battling breast cancer at all, and this was very important to her.

“I made the choice at the beginning of my treatment to limit who I told,” Sarah said. “It worked for me because I never had to be compared to anyone. Truth is, most everyone is affected by cancer and I wanted to hold my treatment and recovery close. I realize I am lucky and thankful for the many women who came before me because they paved the way for me to deal with my diagnosis any way I wanted to.”

Sarah stayed active throughout her treatment, and owes being in good shape before her diagnosis to being able to get through the journey as well as she did. She was slower in her workouts but still made it in regularly. Today, Sarah is in remission, her hair has grown back, and she’s getting her strength back. She’s thankful for her care team, Dr. Nangia, Dr. Bonefas, Dr. Thompson, Mari Rude, her infusion nurse Jan, and all the smiling faces at Baylor St. Luke’s Medical Center.